Jos Buttler gets England back in the game with his 22nd ODI fifty. 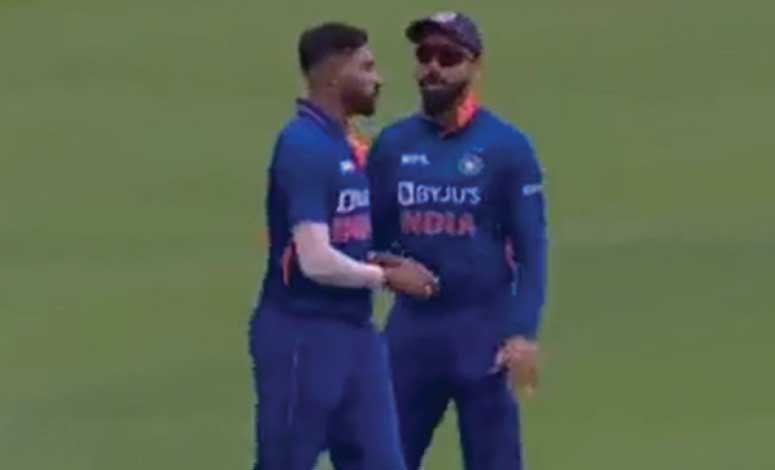 India are a foot ahead of England in the ongoing third ODI match at Old Trafford Cricket Ground in Manchester. Mohammed Siraj struck early to dismiss Jonny Bairstow and Joe Root for a duck. However, skipper Jos Buttler and all-rounder Moeen Ali steadied the ship for England by forming a 75-run partnership for the fifth wicket. The former Indian skipper Virat Kohli, who will be involved heavily in the second innings, is already trending for his leadership skills on the pitch.

The cameraman spotted Kohli having a regular chat with Siraj to guide him with his intakes. His fans, being nostalgic, took social media to share a video about Kohli advising Mohamed Siraj, who took two wickets in his first over. This reminded fans the Kohli’s successful contribution as a skipper till 2021

Both Kohli and Siraj celebrated Root’s wicket by signalling each other and it was clear that whatever Kohli told the pacer, worked fantastically for team India. Kohli was spotted having a regular chat with all-rounder Hardik Pandya as well, who took two wickets as well. Fans are enjoying their favourite player contributing with his leadership skills, despite his struggles with a bat.

Jos Buttler is leading the charge for England with an unbeaten fifty:

Indian skipper Rohit Sharma won the toss again and chose to bowl first in this series-decider clash. Siraj, who replaced injured Jasprit Bumrah, proved the decision right by taking two wickets in his first over. Jason Roy and Stokes then controlled the collapse and formed a fifty-plus partnership. But Pandya removed both the set batters on short deliveries and England were struggling on 74/4 at the end of the 14th over.

However, English skipper and all-rounder Moeen Ali took the charge and dominated middle overs. Ravindra Jadeja sent back Ali, who was batting on 34 runs off just 43 balls, on his first ball of the match in the 28th over. Yet, Buttler kept his cool and eventually smashed his 22nd ODI half-century as England approached the 200-run mark.