The 6ixty: 3 Bowlers who can steal the show in the batting friendly tournament

The unique tournament will kick off on August 23rd. Cricket West Indies and Caribbean Premier League have come up with a unique league that aims to transform the game of cricket. Called the 6ixty, this tournament wants to bring in young and casual fans to cricket.

The tournament is shaped in such a way that batters have a lot of advantages on the field. Rules like a mystery-free hit, only two fielders allowed outside the 30-yard circle and many others mean that bowlers are going to have a tough time in the 6ixty.

Bowlers however have been subjected to adversity in all of cricket’s history and yet they still continue to make their mark in the game. Let’s look at three bowlers from 6ixty who can steal the show despite it being a batting-friendly tournament. 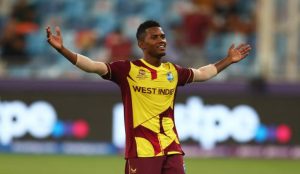 Having made his debut late in the national side, the 29-year-old left-arm orthodox bowler could be one of the best bowlers in the 6ixty. Known to be economical and direct Hosein could use his lack of pace and directness to dominate batters in the short format.

The 6ixty 2022: Predicting three players who can hit the most number of sixes
The 6IXTY: All you need to know about the new league of Cricket West Indies