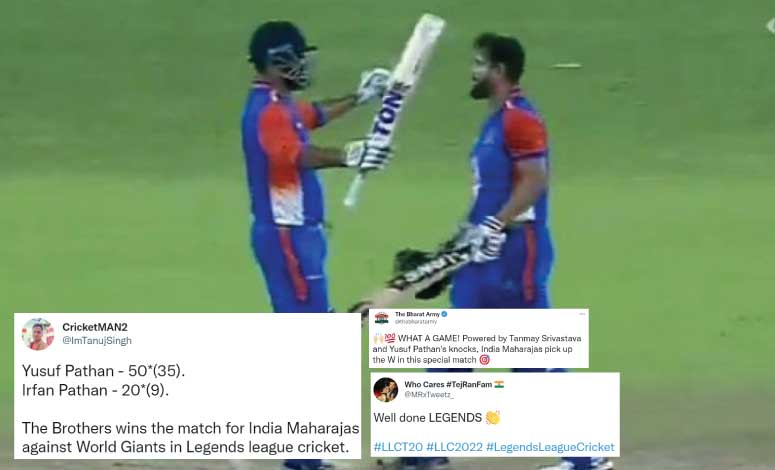 The Legends League Cricket began with aplomb when Indian Legends met World Giants in a special curtain raiser match. Thousands of people in Eden Gardens got to watch their favourite cricketers from years gone by taking to the pitch that they once dominated.

Led by Harbhajan Singh, the Indian giants had some legendary names in the playing XI like Virender Sehwag, Yusuf Pathan, Mohammad Kaif and others. Their opponents in LLC, the World Giants were no slouch either when it came to having stars in their team.

The likes of Jacques Kallis, Thisara Perera, Daniel Vittori, Kavin O Brien etc adorned the World Giants team. The Kallis-led team won the toss and decided to set up the target. Coming onto bat first, O’Brien and Hamilton Masakadza started off cautiously and took the Giants’ side to 50 runs before the Zimbabwe legend departed. O Brien however held the batting from one side and got to a swift half-century in just 31 deliveries. From the other end, Dinesh Ramdin played an important inning of 42. The World Giants were able to set up a good total of 170/8 in 20 overs.

Pankaj Singh, the Uttar Pradesh bowler, took a fifer and stopped World Giants from getting to a higher score.

Coming onto chase the total, Indian Maharajas got off to a poor start as Sehwag departed early on at just seven runs. Number three batter Tanmay Srivastava however clinched a solid half-century and bring the team out of trouble early on. The game however was still stuck in limbo after he departed and the Pathan brothers, Yusuf (50*) and Irfan (20*) had to take their team across the finish line during the dying embers of the game.

Let’s look a how Twitter reacted to Indian Legends’ win at the Legends League Cricket.

The Brothers wins the match for India Maharajas against World Giants in Legends league cricket. pic.twitter.com/mg5MlKMIL1

What a knock by #YusufPathan and #Tanmay

Mohammad Kaif still doing what he did during his playing days…excellent fielding…one of the chief architects who changed the face of Indian cricket when it comes to Fielding @MohammadKaif. #IndiaMaharajas #Legend #LegendsLeagueCricket pic.twitter.com/DOfT8k394X