Watch: Ishan Kishan attacked by bug during national anthem before the start of 1st ODI Team India took on Zimbabwe in the first ODI at the Harare Sports Club on the 18th of August. The Men in Blue called the coin right and chose to field first with the stand-in skipper KL Rahul and star all-rounder Deepak Chahar making a comeback to the Indian team. An all-round performance from the team meant KL Rahul and Co. registered a 10-wicket win over the hosts in the first game.

Meanwhile, a little bug created some trouble for the India batter Ishan Kishan when the national anthem of both teams was played ahead of the start of the first encounter. The left-handed batter was seen evading the bug as if he was ducking from a mean bouncer bowled at him. 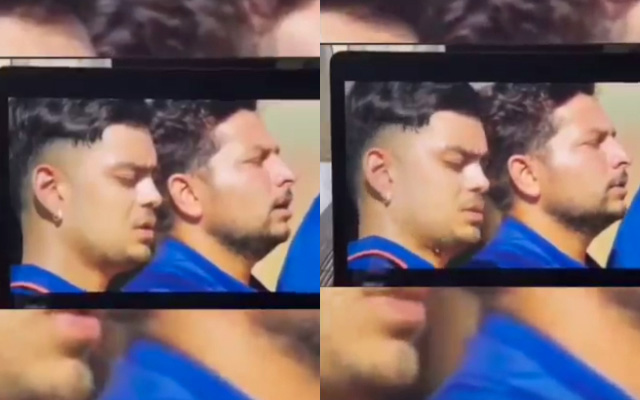 Here is a picture of the same

Ishan Kishan has loss of concentration during the national anthem

The video was posted by an Instagram user who captioned it ‘Ishan Kishan attacked by a bug’. In the video, Kishan can also be seen standing next to Indian spinner Kuldeep Yadav, who did not pay any attention to Kishan as he was singing the national anthem.

“I feel that what selectors do is fair. They put a lot of thought while selecting players as to who should be given the opportunity and where. It is a positive for me because if I am not selected, I will work harder and score more runs. When selectors will have confidence in me, they will obviously keep me in the team,” said Kishan after his snub.

‘Comprehensive victory’ : Twitter celebrates India’s thumping win over Zimbabwe in the first ODI
After Yuzvendra Chahal, Dhanashree Verma comes out to clear the air on their divorce rumours