Watch: Kieron Pollard does a ‘Rishabh Pant’ as he smashes a one-handed six during The Hundred

Pollard smashed a six with an incredible shot leaving the crowd awestruck. 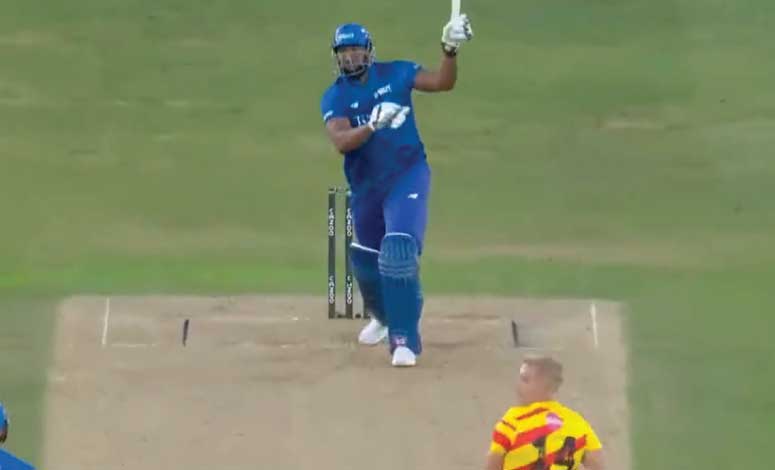 Kieron Pollard is one of the most fearsome strikers of the cricket ball. He has unleashed his wrath on many bowlers throughout his illustrious career. The 6-feet-four-inch giant doesn’t always use his full power to hit monstrous sixes as just a simple swing of the bat does the job for him on most occasions. Pollard once again put up his tremendous six-hitting ability on show during match 20 of ‘The Hundred’ between London Spirits and Trent Rockets.

It all happened on the 68th ball of the first innings, when the 35-year-old, who was playing for London Spirits, smashed a flat six over long-off against left-arm seamer Luke Wood. Pollard took full advantage of the length ball pitched outside the off stump and threw his bat at it as the bottom hand came off. The commentator was also awestruck looking at the six-hitting prowess of the West Indian star as she was heard saying, “It’s interesting this because it didn’t look like he had got hold of it at all.”

Here’s the video of the shot:

Coming back to the match, Pollard couldn’t do much to save London Spirits from a 6-wicket-drubbing by the Trent Rockets. The Spirits were bundled out before playing their full quota of 100 balls as they got dismissed for 122 in just 93 balls. Pollard could only manage to score 9 runs of 7 balls as got clean bowled by wrist spinner Rashid Khan who picked up three wickets for 25 runs in his 20 balls.

The Rockets lost a couple of wickets early in their chase but a magnificent 85-run-partnership between Colin Munro and Tom Kohler-Cadmore for the third wicket made sure there were no more hiccups going ahead. Munro remained unbeaten scoring a brilliant 67 off just 37 balls as he guided his team to victory with 22 balls remaining in their innings.

Pollard also bowled 5 balls in the match giving away 5 runs without picking any wicket. The riveting action of ‘The Hundred’ will continue tonight as Welsh Fire take on Southern Brave at Cardiff starting at 11:00 PM (IST).