Bengaluru Blasters with six points in five matches sit at the top of the Maharaja Trophy KSCA T20 Points table. 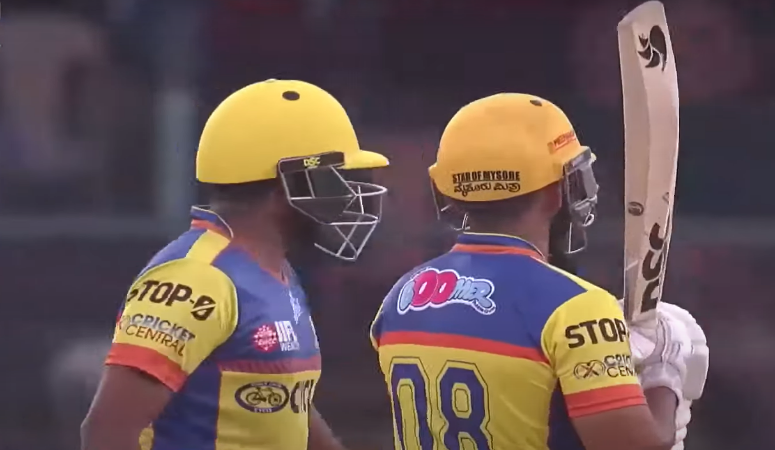 The Maharaja Trophy KSCA T20 is shaping up to be a fight between five teams with one outcast in Salem Spartans. The matches 13th and 14th saw two exciting games in the tournament as it moves towards the second half of the season.

Let’s look at the match report for both games.

SS looking for their first win in the tournament went against Hubli Tigers but failed to get a taste of a win in their fifth match as well. Having been asked to bat first, the SS team could only put 133/6 on the board in 20 overs. Krishnamurthy Siddharth with a gritty half-century (62) along with Avinash D (41) were the only two batters to make significant contributions to the SS team.

In reply, the Hubli Tigers chased down the target in just 17.2 overs to win their second match in the tournament. Opener Mohammed Taha scored an incredible 78 off of just 49 deliveries and took the team across the finish line. Srinivas Sharath also lent a helping hand with his 41 off of 42 balls.

While the first match on August 13th proved to be a low-scoring affair, the second one was entirely the opposite. BB after winning the toss decided to bowl first. This proved to be a wrong decision as the MW team were able to make 171/6 while batting first. Pavan Deshpande brought up his first half-century of the tournament (55) to charge of MW’s batting. Shubhang Hegde remained not out at 33 meanwhile Shreyas Gopal also contributed quick 27 runs to the Mysore Warriors‘ score.

Coming onto chase the big target, the BB team got off to a poor start as both their openers were sent packing at just 17. Aneesh V (48) and Shivkumar Rakshith (34) steadied the innings but did not get support from other batters and the team could only reach 165/8 at the end of 20 overs.

MW won the match by six runs and moved to second on the Maharaja Trophy KSCA T20 Points table with six points.