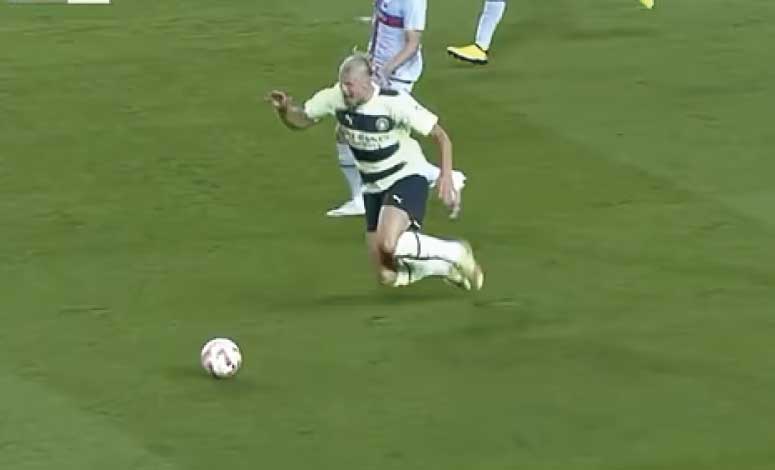 Erling Haaland is probably the hottest property in football right now. The sensational youngster took the Bundesliga by storm after signing for Borussia Dortmund in 2020.

He scored mindboggling 67 goals in 62 matches at the German club, bagging the award for the Golden Boy of the league and player of the month on many occasions. On the back of his impressive performance in Germany, many big clubs encircled the Norwegian youngster for his services. It was, however, the English club Manchester City who signed the 22-year-old making their Premier League winning team even stronger.

Haaland had a great start to his career at City bagging two gaols in the first match itself. So when the English side met Barcelona for a friendly, fans expected the Norwegian to come up with a good performance. Things, however, did not turn out the way they had hoped for.

One instance from last night’s game including Haaland has been doing the rounds of the internet for all the wrong reasons. In the video, the City striker is seen falling down in the penalty box without any contact from the Barcelona defender Andres Christensen.

This was later given as a foul by the Barcelona player and Manchester City was awarded the penalty. On close inspection, however, the foul seems to be incorrectly given and it was indeed Haaland who had faked a foul and dived in order to win a penalty.

Dive of the season from Erling Haaland. What. Is. This? pic.twitter.com/n9bLgUorIk

Nothing is hidden from the sharp eyes of social media users these days and such was the case with Haaland’s dive. People on Twitter called out the Norwegian youngster as soon as the video surfaced. Some called him a “cheat” while others expressed that the referee was “blind” for not seeing the clear dive from Haaland.

The charity match between Barcelona and Manchester City was organised to raise funds for ALS research and ended in a 3-3 draw between the two heavyweights. City return to the Premier League action with a game against Crystal Palace next whereas Barcelona will play against Real Valladolid in the La Liga.

Let’s look at how Twitter reacted to Erling Haaland’s dive against Barcelona:

Why would Haaland dive in a charity game.

Tragic dive at the end from Haaland ?

This game goes to you, Juan Carlos, and to all the fighters fighting against ALS ? #BarçaManCity pic.twitter.com/N0iWP7Xzce

Nice dive from Haaland ? Atleast now they know why we are the greatest club of all time, y'all can learn alot from barcelona and we own Manchester city. ?? Barcelona's third kit is fire thou ?? I'm inlove ? #barcamancity pic.twitter.com/0KRJu3vkVK

Haaland receives ovation from Camp Nou, then proceeds to dive and get a penalty in a charity game.

Nah I'm dead this Haaland dive in a charity game is so shameless ?

I knew Barcelona sold this Match to Man City cause how’s that dive by Haaland a Penalty? ???

Haaland doesn't even know how to dive, mf looked back and fell 24hrs after the contact??

Erling haaland deserved a Red card for that dive

all that dickeating just for haaland to win a pen from a dive, lmfao so deserved ratalans https://t.co/ybJ1msIvrX

Erling Haaland (Mancity): 'My dive? I didn't think it was a dive. I felt my foot getting tripped and it happened so fast. Players in modern football do it all the time. Salah does in Premier League …'

Man is diving in a charity game pic.twitter.com/k1pmD3UvIT