India is scheduled to play its first match of the World Cup against Pakistan on 23rd October. Indian cricket is so stacked with talent that it is becoming increasingly difficult to keep players out of the playing XI. Former England cricketer Graeme Swann had recently said, “India should send their B team to Australia and win the World Cup.” Although his comments came as a humorous take on India’s cricketing strength, it is not far from the truth.

Indian second-string side has recently performed immensely well against South Africa, Ireland and now West Indies in T20Is. The Indian T20I team without the certain starters, Virat Kohli, KL Rahul, Jasprit Bumrah and Yuzvendra Chahal defeated a strong West Indies side by a massive 68 runs in the first T20I match.

India is looking strong in all positions apart from the opening spot. With the opening slot yet to be filled, let’s look at five players who could open the innings with Rohit Sharma in the upcoming T20I World Cup in Australia. 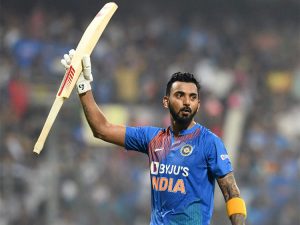 KL Rahul is the defacto Indian opener in T20Is along with Rohit Sharma. The Mangalore-born batter, however, often struggles with injuries and does not play for a large part of India’s international season.

Currently out with an injury, the 30-year-old is struggling to get into full fitness and hasn’t played a single match after the Indian T20 League ended. His immense performances in the past, however, allow him to walk into the team even after months of being out. In 56 matches, the Lucknow captain has made 1831 runs at a very impressive average of 40.69. His strike rate of 142.49 is also among the highest in the Indian team. KL Rahul would be the first choice as a Rohit Sharm partner.